All posts in Press & Media

The shows are booked and the time has arrived to celebrate performing artists on Gabriola Island with an initiative called Gabriola Live brought to you by the Gabriola Arts Council.

Protocols must be followed for all venues and vaccine passports are required. You can purchase your tickets on our website and the links are provided below or just go to the GABRIOLA LIVE tab on the navigation bar.

Here’s what we have lined up for you:

A newcomer to Gabriola, but not a newcomer to comedy, Shirley Stark hosts a gut busting comedy night at the Surf Lodge featuring Kerry Unger. Also on the bill are Troy Stark, Blayne Smith, and Angel Woodhams.

Three nights at the Phoenix you won’t want to miss, as we roll from jazz, to cello, to an amazing trio with a guest violinist. A myriad of musical arrangements by Gabriola virtuosos.

Cellistic interpretations and arrangements of works by Gabriola artists. Corbin is a genuine entertainer and his concert will be full of fun surprises, not to mention some fine cello playing.

John Capon on trombone, vocals; Brad Shipley on guitar, vocals; and Brian McMahon on upright bass, vocals. The trio is delighted to have Patricia Armstrong join them on violin for a special afternoon of swing, jazz, and classical music.

Our second trio of concerts at the Phoenix Auditorium is sure to beat those winter blues and fill your heart and mind with incredible music over three magical nights. Treat a friend and experience the talent that graces our tiny island.

Pierre Schryer is a leading Canadian traditional fiddler. He captivates an audience with his energy and genuine warmth. Pierre will be joined by guitarist Andy Hillhouse. Dagger Harbour will open the show. Dagger Harbour has a harp (Mars Kurek), and a banjo (Emily Carson-Apstein), and the harmonies you need.

The Gabriola Arts Council is hiring a Festival Coordinator for the Isle of the Arts Festival in 2022.

This is a dynamic position with many challenges and even more celebratory moments. You will be responsible for putting together the workshop festival known as the Isle of the Arts. Ten days of artists teaching workshops on a myriad of topics. You will be contacting artists, recruiting volunteers, scheduling workshops, working with our a graphic designer on the brochure and advertising, proofing, working on the back end of the website, creating the workshop registration page, coordinating talent, communicating regularly with the Executive Director, plus more. It is an action packed contract and a very fulfilling one.

The successful candidate will have the following skills (if you do have some, but not all, we are still interested in hearing from you):

If this sounds like a challenge you’d like to take on and become a member of the Gabriola Arts Council family, we’d love to hear from you. We are also open to partnerships taking on the contract. 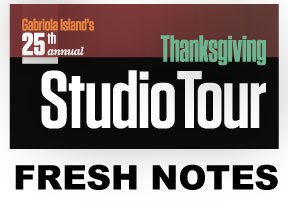 Join us even if you are not on island for Fresh Notes: Gabriola Youth in Concert at Tour Central. Five nights of five different performers with two performances an evening. From singer/songwriter to rap artist, diverse and talented. It all takes place in the company of the amazing art of Studio Tour 2021 artists. The perfect setting for artists to celebrate artists.

The evenings will be available on Zoom. Here is the link: click here!