October 21, 2019
Congratulations to all five book champions who so eloquently and passionately defended the book they felt was the quintessential Canadian novel. Chris Straw, defending Indian Horse by Richard Wagamese, received the most votes from the enthusiastic audience — way to go, Chris!
This sold-out event, hosted warmly by Sheryl MacKay from CBC’s North by Northwest, was co-hosted by the Friends of Gabriola Library. Money raised through the raffle will be shared with the Gabriola Elementary School Library.
Thanks to all of the volunteers who helped out at the door, to set up and clean up, at the bar, in the kitchen, on lights and sound, and more. Thanks also to North Road Sports for selling tickets, to Nesters for the food donations, and to everyone who let us use your wing-back chairs to help create the right mood.
We’re already looking forward to next year! 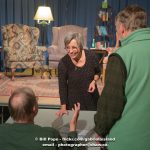 Sheryl MacKay checking in with Gary Holdgrafer, the official timekeeper for the evening. 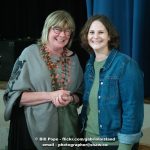 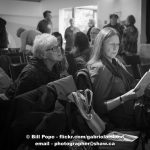 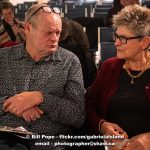 Chris Straw looks on skeptically as Carolyn Bell starts to make her case for Margaret Atwood’s The Handmaid’s Tale. Or maybe they were discussing Madye’s delicious home-made doughnuts? 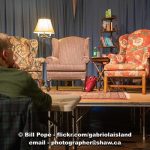 Waiting for champions to take the stage. 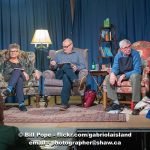 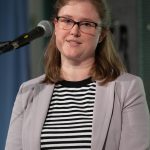 Amy Dawley offered an insightful and heartwarming perspective on the meaning of “quintessentially Canadian.” 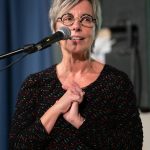 Sheryl MacKay from CBC’s North by Northwest was the host and referee for the evening. 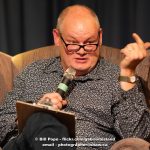 Chris Straw, championing Indian Horse by Richard Wagamese, received the most votes from the audience. 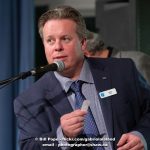 Gabriola’s new librarian Jeff Strain, drawing the winning ticket for one of the book raffle prizes. 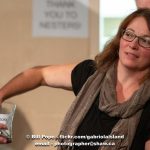 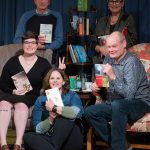 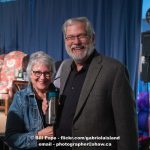 Madye Hall and Bill McGann—they had the vision for the event, and lead the organizing teams.

Thanks to Bill Pope for capturing so many of the evenings wonderful moments.
Comments: Comments Off on Gabriola Reads Results! Categories: Press & Media