Gail Lund has been selected to receive the 2016 Arty Award. She will be presented with the award at the Artist Appreciation Party — part of the Isle of the Arts Festival — at the Surf Lodge on Friday, April 8 at 5:30 pm (the event starts at 5:30, the presentation will be at 6 pm). 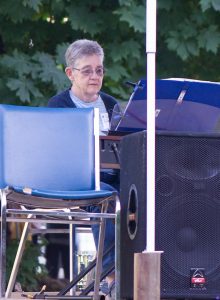 as a choral director, singer, accompanist, composer, and arranger. Those who have worked with Gail say she has a way of making the process of rehearsing a joyful experience by empowering inexperienced choristers and challenging those who are more experienced. She has a wonderful sense of humour and is well-loved by all who work with her.

Gail has been Music Director of the Gabriola Island Singers for over 26 years and for six years was co-director (with John Capon) of the Malaspina Choir. She selects great repertoire, much of which she arranges or composes herself. Among her original works is her satirical ode to “The Lesser Joys of Christmas” which she wrote with Marian Woodson. Her “Gabriola Complaints Choir” song has been a YouTube phenomenon and her musical comedy entitled “Rainbow Snow” was very well received.

Gail encourages and supports choir members to perform in small groups and as soloists whenever possible. The Island Singers and Gail are also enthusiastic supporters of local community events. 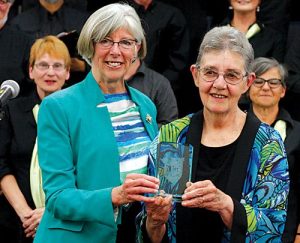 Gail Lund receiving award from the Lt. Governor of BC in 2015.

In May, 2015, The Honourable Judith Guichon, Lieutenant Governor of British Columbia, visited Gabriola to present $1,000 and a trophy to Gail and the Gabriola Island Singers, for their winning contest submission of “Happy Birthday Canada” written by Gail in honour of Canada’s 150th birthday celebrations in 2017. 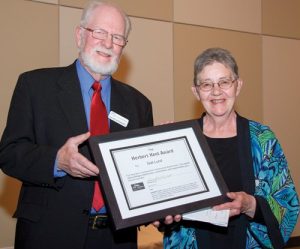 In 2013, Gail received the Herbert Kent Award at the banquet during BC Choral Federations annual celebration Chor Fest. The Herbert Kent Award is given to an individual who displays outstanding commitment and responsibility to choral music, and Gail’s award was for long-term service to regional choirs.

At that time, John Capon said, “Gail is one of the finest musicians I have ever met. That is coming from my 53 years as a full time professional musician, which is a lot of fine people.”

Congratulations to Gail, and thanks for all you do for music and music-lovers on Gabriola Island.

[photographs courtesy of Bill Pope and The Gabriola Sounder]

WHO is eligible to win the Arty Award? Any full-time resident of Gabriola Island, or a Gabriola-based group or organization. Employees of the Gabriola Arts Council are not eligible, nor are current directors. Contractors and freelance workers are eligible. Past-serving directors are eligible.

WHY does the Arty award exist? To honour the contribution, commitment, hard work and engagement of artists, artisans, art lovers, and arts supporters on Gabriola Island, and to bring attention in the community to the all of the above.

HOW is the ARTIE Award recipient determined? GAC members and other Gabriola residents can make nominations. The GAC Board of Directors reviews all nominations and makes a decision based on the information provided in the nomination form and their knowledge of the nominees and their contributions.