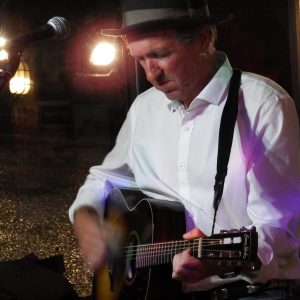 Gary retired from his lifelong work as a trainman a few years ago and took up the guitar more seriously. Shortly after, Gary and his bandmates started performing on the Island, most often at the Skol Pub where this popular Alt Country group keeps the dance floor hopping.

Gary has a special role at the Gabriola Arts Council. For the past five years, Gary has been one of GAC’s ace volunteers. Gary has been essential to the successful operation and logistics of many GAC events. It would not be a stretch to say that the theatre and music festivals wouldn’t have happened without him. Gary has stepped in to do everything from building stages to managing technical set-up and sound, to hauling chairs, tables, and risers, to—in a glorious on-stage performance at the Atlas Affair Fundraiser in 2016—accompanying Shelagh Rogers in a special Gabriola version of the song “I’ve Been Everywhere, Man”.**

Community events like the ones the Arts Council produce can only happen when a team of committed volunteers get involved. People like Gary—and many others like him who regularly make themselves available to help with our events and programs—help to keep this community lively and exciting. The note that accompanied Gary’s nomination says it best:

I cannot remember a GAC event where Gary was not instrumental in helping to make it happen. Quietly behind the scenes, he has generously contributed his time, expertise, thoughtfulness, equipment, and effort to help GAC’s initiatives to be realized. Planning, set up, and take down of events seldom happen without Gary’s involvement, yet he never seeks recognition for the work he does. This level of volunteerism is an art form in itself. Thank you, Gary!

The ARTY AWARD is presented each year to an individual or organization that has made a significant contribution to the arts on Gabriola Island. Previous winners have all have done their part to build or support the creative vibe on Gabriola. Here’s the list of previous recipients:

Nominations were received from community members (14 people or arts organizations were nominated). The GAC Board reviewed all nominations and voted on the winner.

The ARTY AWARD will be given out at the ARTY PARTY on Saturday, April 14 at the Surf Lodge. Please join us to honour Gary Holmes, to celebrate the arts on Gabriola Island, and to wrap up the Isle of the Arts Festival.

Photo of Gary Holmes at the Skol Pub by Trask White.