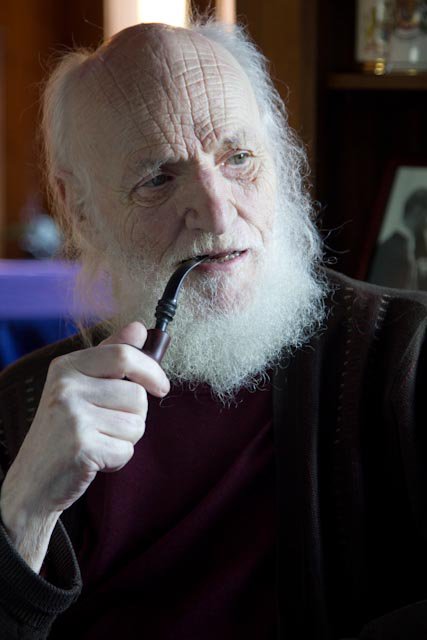 Ted was a graduate of Bishop’s and McGill Universities, a member of British Columbia’s first organ transplant team, and director of the province’s kidney transplant programme from 1968 until 1987. His work in nephrology and transplantation led him to productive research in the related fields of immunology, haematology and genetics, his motivation always being his patients and their quality of life.  When administrative and philosophical changes challenged his ideals, he left medicine and academia for a new career.  He and Phyllis acquired Page’s Resort & Marina on Gabriola Island, where he became as dedicated a member of the island community as he had of the medical.

Soon after arriving on Gabriola Island in 1987 as new proprietors of the Page’s Resort & Marina in Silva Bay, Ted and Phyllis demonstrated their love of the arts and community by establishing the Sandstone Studio in 1990. The Sandstone Studio came into being as the Reeves, before a show, transformed the bookstore in the reception area of the Resort into walls that would display art. They extended the Gallery space by opening their home where their living room—with a cathedral ceiling and windows overlooking the bay—would serve as the main Gallery space.

Ted and Phyllis hosted a wide variety of artistic events featuring diverse, accomplished artists both local and from afar. Phyllis writes in recounting the history of Page’s and their time there: “The following year one of the campers is a composer. Ted finds Jeannie Corsi, with earphones and portable keyboard, working at a picnic table. In August 1992 Jeannie gives a piano concert in the Sandstone Studio. Again Gabriola responds. The concert is sold out, and Page’s looks ahead to a series of chamber concerts.”

Whether paintings by noted Vancouver painter Pnina Granirer, a concert by Mezzo soprano Elizabeth Wilson (Toronto), composer Charles Wilson (Toronto), or a reading by mystery writers George Szanto and Sandy Duncan, the room was always full and infused with excitement and the intimacy that only an in-home hosted event can offer. Ted would personally pour an after-event sherry and encourage attenders to partake of the exotic cheeses and appetizers. Their home was filled with art in every form. Normally a man of few words, Ted would happily launch into the story of a certain sculpture or any art piece if he found you captivated by it.

Robert Amos, Victoria art writer in the Times Colonist wrote in 2006: “The aroma of Ted’s pipe tobacco and the somnolent presence of an enormous Newfoundland dog have never been banished from this salon of the arts. Despite its undeniably homey atmosphere, The Sandstone Studio has attracted renowned and adventurous artists.” In many ways The Sandstone Studio was Arts Central for Gabriola before the birth of the Gabriola Arts Council in 1997. The Reeves at Pages Resort hosted many planning meetings to launch the Gabriola Arts Council, and featured largely in its formation.

That “homey” atmosphere is what was alluring for so many islanders along with the intimacy, the art and the opportunity for personal conversation and conviviality—all part of the art event. Ted had had his own artistic touch other than that required of a transplant physician, he invented an untold number of gizmos that stretched the length of the deck of their home. The creations would be hoisted and essentially Ted would fly various and sundry birdfeeders out of the reach of common predators including the household cat. Picture Ted wearing “wellies”, one tool or another in hand, an easy unhurried walk as he attended to chores about the property or dock, or bent over the motor of his current car restoration project, pipe in hand, dog not far, and you will conjure in a small way a sense of this man. Memories of Ted’s sardonic wit, generosity, kindness and keen love of community are infused in the memory of those who had the privilege to know him.

You remain in our hearts Ted, fly free.