There are many reasons that I loved Jeff Molloy … but here I want to talk about him as my boss, in his role as a director and leader with the Gabriola Arts Council. Jeff took this role very seriously. He exhibited professionalism, commitment, and a fierceness that inspired his fellow directors and staff.

He was fearless. And audacious. 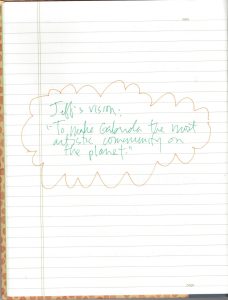 Jeff’s vision: “To make Gabriola the most artistic community on the planet.”

This is a page I photocopied from an old notebook, with notes I took at a strategic planning session almost four years ago, shortly after I started working with the Arts Council. My original note was just the words; I added the enthusiastic circle later when I was reviewing the notes.

Jeff would say things like that — We’re going to have the greatest arts council in the whole world! — without irony, and he wasn’t being boastful. He was just really clear that we had to continually raise the bar. He was entirely committed to our mission to make the work we are doing — to build a creative community — so compelling that everyone on Gabriola, and maybe eventually everyone in the world, would want to be along for the ride.

And because it was Jeff — because of his infectious enthusiasm, his get-’er-done attitude, his enormous faith in the mission — it was easy to be inspired, and to believe that it was entirely possible. 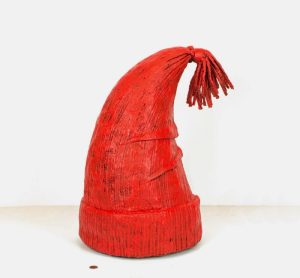 And so this is the challenge for the GAC board — and for the staff, and for every artist on the Island, and for every Arts Council volunteer — as we carry on without Jeff. He has thrown down the gauntlet — or in his case, the toque — and it’s up to all of you, all of us — to take it up. For Jeff, we’re going to have to roll up our sleeves and work harder, with greater focus, and unfettered ambition. It’s up to us to create and nurture that warm, generous, and creative community that Jeff believed in, with that ever-growing table where everyone is welcomed and supported.

Remember the phase in the ’90s, when Christian youth wore bracelets and t-shirts emblazoned with WWJD — What Would Jesus Do?